A GROUP campaigning for the UK to remain in the EU has responded to Nigel Farage’s suggestion of holding a second referendum.

Bremain in Spain, who are also partnered with Britain for Europe and the European Movement, are in support of another vote based ‘on the facts’ once the outline of the deal is known.

Sue Wilson, Chair of Bremain in Spain, said: “In the event of a likely Remain win, I would take great pleasure in being able to throw ‘the will of the people’ back at the Brexiters, who have been shoving it down our throats for many months.”

The group are also highlighting the broken promises to restore ‘votes for life’ for the one million Brits living abroad for more than 15 years.

Wilson said: “All the talk of the public having another say is incredibly frustrating for Britons in the EU who are still without a vote.”

She added: “Promises have been broken so many times by the Tory government that we have all become cynical.”

Bremain in Spain are now lobbying in support of a Private Member’s Bill proposing the restoration of voting rights for 2022.

This, however, will be too late for those wishing to vote in any further referendum on Brexit. 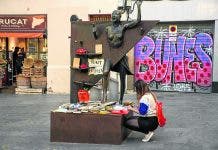 Brits stranded in Spain as NO Ryanair, Jet2 and EasyJet flights available, despite UK Government warning to ‘return immediately’