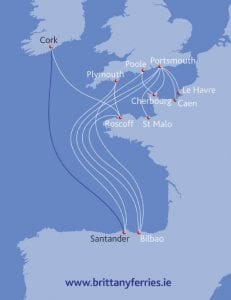 THE first ever ferry link between Ireland and Spain has been announced by Brittany Ferries.

The company presented its new route from Cork to northern Spain today.

It will begin at the end of April and will link Cork and Santander, with two return trips per week.

It is the first ever link between the two countries.

“This is a significant move for Brittany Ferries, offering haulage companies a direct route to Spain and passengers a far greater range of holiday options from Cork,” said Hugh Bruton, general manager of Brittany Ferries Ireland.

“As a destination, Spain promises visitors a wealth of opportunities. It hosts sweeping sandy beaches, snow-covered mountains just an hour from the port, fabulous food and offers visitors a welcome as warm as the Spanish will receive when they join us in Ireland.”

The ship will carry around 500 passengers with space for 195 cars.