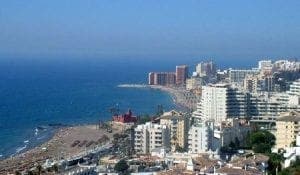 AN Irish expat is currently fighting for his life after being stabbed repeatedly in his home in Benalmadena.

The 37-year-old, from Dublin, was attacked in the basement of his own house and sources say he could have a fractured skull.

It is believed friends and family rushed him to A&E after he managed to get up the stairs and tell his partner.

La Policia Nacional in Malaga are considering “all possible theories” in relation to the motives behind the callous attack.

The incident occurred shortly before 11pm on Wednesday night.

He is thought to be “seriously ill” and is being treated at High Resolution Hospital in Benalmadena.

A spokesman for La Policia Nacional in Malaga, said: “National Police are investigating a stabbing that occurred last night at a property in Benalmadena.

“The incident occurred around 11pm.

“Moments later the victim was taken to hospital by people close to him where he was admitted with several stab wounds.

“No arrests have taken place so far and officers are investigating the circumstances surrounding the incident. No hypothesis has yet been ruled out.”

Police officials are yet to catch the attacker.