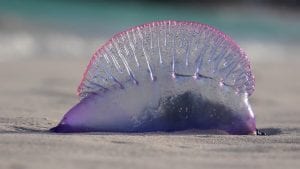 AN increasing number of killer jellyfish are washing up on beaches along the Costa del Sol and Andalucia.

Warnings have been issued for the Man O’war jellyfish, which have been spotted by beachgoers in Malaga and Marbella.

Its tentacles can grow to be more than 30 metres long and can give a painful sting causing whip-like red welts.

If a human comes into contact with a high number of tentacles, particularly around the torso, it can cause death, especially in children.

Hundreds of the toxic jellyfish have washed up in Cadiz and Huelva provinces after being blown in by strong winds from the mid-Atlantic Ocean.

A beach in Lepe, Huelva, was closed after more than 200 appeared.

An official from the Aula del Mar marine museum in Malaga said: “We urge people not to touch the animals as they can still sting when stranded or dead, and the stings can be extremely severe.

“The tentacles can become detached and these are also still capable of stinging.

“Animals and children are particularly at risk.”