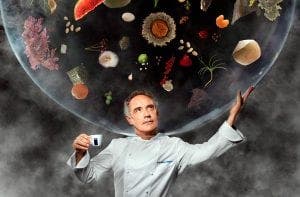 HE is easily Spain’s most famous chef of all time.

So it’s appropriate that Ferran Adria – whose El Bulli restaurant was named Best in the World on five separate occasions – is helping to create the definitive culinary encyclopedia.

The 35-volume collection – called Bullipedia – has already begun with the first book published in November.

“This is the project of crazy people, and it will take years and years to create,” explained Adria.

In total, there will be nine separate books – each 500 pages long – just on drinks alone, before the food section starts.

“There are only two liquids in the world that are not elaborate beverages, mountain water and freshly milked milk. All others are classified as processed beverages,” he explains.

A pioneer in molecular gastronomy, Adria shocked the gastronomic world when he closed down El Bulli in 2011.

Starting his career as a dishwasher at 18, he became head chef of El Bulli by 24.

He now runs a cookery school at the same El Bulli venue, in Catalunya, and travels the world as a food diplomat.

His encyclopedia will be released bit by bit over the next five years. Each book will cost around €75.