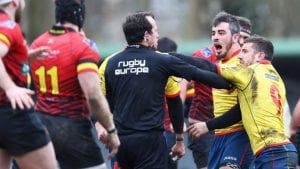 AN investigation has been launched to analyse the performance of a Romanian referee in Spain’s Rugby World Cup qualifier against Belgium.

Rugby Europe will analyse the match on Friday after Spain filed an official complaint of bias.

Their defeat meant Romania qualified for the 2019 world cup in Japan instead of them.

Spain will have to beat Portugal and Samoa in the play-offs if they want to reach Japan.

Rugby Europe said it would not be commenting until the ‘usual full review’ of the match official’s performance had been conducted.

“The meeting’s agenda will be modified and a large portion of it will be devoted to the analysis of every stage of the Belgium v Spain game,” it said.

“Following this meeting, a statement will be released to Rugby Europe Board of Directors for dissemination.”