A BRITISH TV benefits couple tried to defend taking their kids out of school for a holiday to Spain but saying it was educational because they learned about volcanoes.

Scott and Leanne Gavin were taken to court after three of their four kids missed a week of school for a trip to Fuerteventura.

The parents denied any wrongdoing and said the school was fully aware they were taking their children on holiday between June 19 and 23 last year..

The Gavins, who recently appeared on Channel 5’s Great British Benefit Handout, also refused to pay a fixed penalty notice for the absences.

Dad Scott, 33, who has set up a mini-zoo and exotic animals business,  said he wanted to take his family on holiday due to the amount of media attention he and his family were receiving. 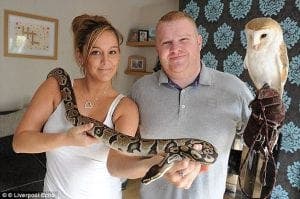 He told Liverpool Magistrates’ Court: “There were reporters harassing the children outside the house.

“Also, the exotic animal visits business we run is seasonal – we are busiest at half-terms and school holidays, not during school term.

“The school knew we were taking the children on holiday with us.”

Gavin then claimed the trip was ‘educational’ for the children.

She added: “They learned about geography as we flew over the different countries, also about volcanoes.

“Two of the children learned how to swim, and speak a little bit of Spanish.”

Jason Hollywood, head teacher of the school, said he had had a constant problem with the Gavins with unauthorised time off and lateness.

He told the court: “It has been the worst I have ever witnessed in my 26-year long career.”

Magistrates found the Gavins guilty of being a parent of a child of compulsory school age registered at a school who failed to attend regularly.

They were each fined £350, and ordered to pay £400 each towards prosecution costs at the rate of £30 each per week.