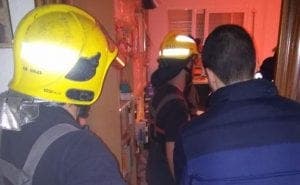 A TEAM of eight firemen, local police and municipal staff had to help move a 300-kilo man from his home in Malaga yesterday.

Juan Jose, 52, who is morbidly obese and had waterlogged lungs, had been unable to move for a week.

He had called daily for emergency services to help him move but claims he was not classed as an emergency.

The Malagueño has been suffering from anxiety and depression and has let his weight get out of control in the last year.

Once at Juan José’s house, the firefighters had to work carefully because he was very weak and needed oxygen.

The fact that he had not moved for a week and that his lungs were waterlogged was accompanied by a hemorrhage caused by the rupture of a vein. 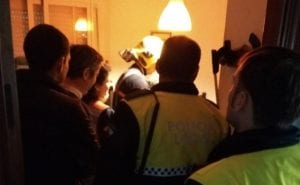 “It was all very slow given the size of the patient,” the bomberos said, adding that it was difficult to even move him from one room to another because he rubbed against all the door frames.

Juan José had to be attended by the Medical Unit of Firemen and once in the street an ambulance equipped with a special stretcher to transfer patients with morbid obesity moved him to the Clinic.

But the difficulties continued, as the mechanized stretcher was prepared for 250 kilos and the weight of Juan José exceeded 300.

The fuses of the device jumped several times and the stretcher had to be rearmed.

Once at the clinic, specialists assessed the condition of Juan José before he was admitted to the emergency room.

Specialists said any surgical intervention to treat the morbid obesity has to be carried out under very strict conditions and that in the case of Juan José, it will be considered ‘whenever his state allows it’.

His sister Lola admitted that ‘in the last year things had gotten out of hand’.

Town hall sources have confirmed that in the last twelve months the weight of Juan José multiplied so quickly that since Christmas he has received a visit from the Social Emergency Unit to address his case on at least a dozen occasions.