In a dramatic last-minute intervention Spain said it may not approve the new text worked out between British and EU negotiators.

EU Council chief Donald Tusk was forced to write to leaders telling them that finalising an agreement on the pact ‘remains open’.

The Polish eurocrat said: “I still need a couple more hours to consult with some of the most concerned Member States.”

An EU diplomat told The Sun: “Spain is playing hardball.”

It comes after the UK conceded on fishing rights and immigration last weekend in a bid to seal the deal.

But the ‘Brexit breakthrough’ has been put in jeopardy by Spanish prime minister Mariano Rajoy who protested that a footnote describing his veto over a transition deal applying to Gibraltar was not marked as ‘signed off’.

The Spanish leader is now demanding that a separate Council declaration is drafted re-emphasising it, a request some member states are reluctant to go along with.

Green, which covered 75% of the text, indicated signed off passages, yellow a partial agreement and white areas of divergence.

And although none of the footnotes were coloured in, an asterisk linked to Spain’s Gibraltar demands was shaded green.

A Eurocrat told the Sun that Donald Tusk will probably have all issues ironed out by 1pm today.

He said: “Before Tusk can recommend to the leaders ‘please do welcome that agreement including on transition’ Member States should have a chance to look at it.”

Meanwhile, Bulgarian minister Ekaterina Zaharieva said the bloc would show ‘solidarity with Spain’ and warned: “Of course, until the end nothing is sure.” 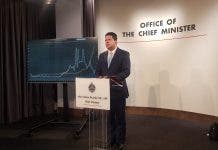