A TREASURE ship that both Spain and Colombia claim ownership of would cost €57.2 million to recover, a new report has revealed.

The San Jose galleon, which was carrying among its haul 11 million gold and silver coins, was shot down by British Pirates on June 8, 1708. 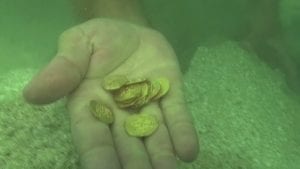 Found on December 4, 2015 off Colombia’s Caribbean coast, it was heading from Spain to Cartagena.

There is an ownership debate between the two countries with Spain stating it was a state-owned vessel, while Colombia argues the treasure is rightfully theirs as it was on its way to the country.

Both however, have expressed a readiness to reach an amicable agreement.

Colombian president Juan Manuel Santos has stated that public and private companies would be used to recover the wreck, as not to use taxpayers’ funds.

The haul which was estimated at $1 billion (€811,400) in 2012 also includes several million emeralds, pearls and other precious stones.