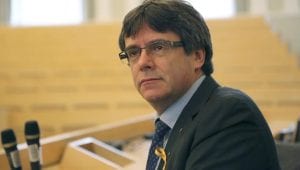 GERMAN prosecutors have requested the extradition of former Catalan leader, Carles Puigdemont, to Spain on Tuesday.

A request has been filed to a regional court in the town of Schleswig-Holstein to send Puigdemont to Madrid, following his arrest in Germany in March.

In Spain he faces charges of rebellion – for organising an unauthorised pro-independence referendum – misuse of public funds and sedition.

He could face a prison sentence of up to 30 years.

German prosecutors also requested that the Higher Regional Court in Schleswig-Holstein hold Puigdemont in prison for the duration of the proceedings, due to fears he may escape.

He has been held in a prison in Neumunster since he was arrested on March 25, when he was intercepted by German police while travelling back to Belgium, after he had left the country to host a series of talks in Finland.

His arrest triggered a wave of mass protests in Catalunya.

The separatist leader fled to Belgium in exile after Spanish Prime Minister, Mariano Rajoy, dissolved the Catalan parliament and placed the region under direct rule from Madrid following the referendum in October.

Spain issued a European arrest warrant and had been in close contact with German authorities in an attempt to capture Puigdemont.

However, for a European arrest warrant to be valid and for the extradition request to be fulfilled, the charges must have a punishable equivalent under German law.

The charge of rebellion is not punishable in the German criminal code but the state prosecutor said this could be equated to high treason, therefore a ‘word-for-word conformance’ between Spanish and German laws is not legally required.

German prosecutors said in a statement that the charge of rebellion ‘contains in essence the accusation of calling an unconstitutional referendum despite violent riots that could be expected.’

It could take some days for the Schleswig-Holstein court to make a decision on whether to extradite the former president and the conclusion is not yet clear.

Puigdemont’s lawyers have filed an appeal and have called on the German government to intervene.

But the German government have insisted that this is a matter solely for the courts.

Authorities have 60 days to make a decision.