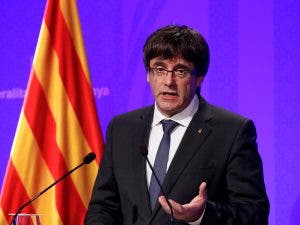 After a week of deliberation, the court in Shleswig-Holstein said Spain’s rebellion charge against Puigdemont was not a viable reason to extradite him.

The separatist leader will be released from custody with a €75,000 bail, yet it is unclear when he will be able to leave Germany as the European arrest warrant against him is still being processed.

In the meantime he will have to register once a week at a police station in Germany.

It comes after the former president was arrested in Germany in March after Spain issued a European arrest warrant to extradite Puigdemont back to Madrid.

Puigdemont faced charges of rebellion, misuse of public funds and sedition following his involvement in the Catalan independence referendum in October.

Although the court has ruled out the offense of rebellion, the 55-year-old is not in the clear yet, as his extradition has only been suspended and could still face charges of corruption in Spain.

The court also said there could be a case for the charge of misuse of public funds and is investigating this.

Earlier this week German prosecutors requested his extradition, on Spain’s charge of rebellion, and that he remain in jail until the court reached a decision.

But the charge of rebellion is not punishable in the German criminal code and it was thought high treason could be an equivalent offense in German law.

However, the court decided high treason was not suitable as there was no element of violence in the alleged acts carried out by the former president.

The Shleswig-Holstein court said in a press release : “What is required is that violence put such pressure on a constitutional organ that the will of the latter is crushed and that is not the case here.”

Although the court believed the pro-independence movement triggered acts of violence, these could not be personally attributed to Puigdemont.

The Spanish government said it respected the decision of the German court.