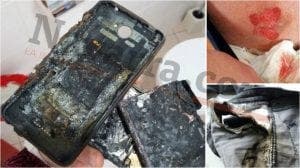 A TEENAGE boy has been treated for first degree burns after his mobile phone exploded in his pocket.

According to Navarra.com, the 14-year-old from Pamplona was sitting in class when his phone started making noises in his pocket.

It suddenly became very hot as smoke began bellowing out from his trousers.

“It was all very fast, and when he tried to remove his phone he burned his fingers”, the boy’s mother said.

The phone in question was a BQ Aquaris U model that his family had given him less than a year ago.

It was his first phone and he received it as a birthday gift in June 2017.

Teachers quickly rushed the boy to the San Fermin Clinic, a few meters from the school in Navarre.

The mother added that she would be reporting the incident in the hope that ‘that something like this does not happen again.’

“Imagine if you are carrying it at night on the nightstand or in other circumstances … It could be much more serious,” she said.

“Luckily he was wearing jeans, which are more resistant, if not the injuries could have been much worse.”

A few months ago, two other phones of the same make burned in a very similar way in the Basque Country.

“Burning a battery is very unlikely. We are talking about 0.001% “, the company said at the time.