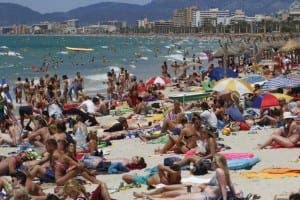 NEW rules for travellers who attempt to scam tour operators over bogus holiday sickness claims are set to be introduced in Spain.

Coming into effect in the coming weeks, the curbs will close a loophole that allows holiday makers to issue fraudulent claims, said the British Embassy in Madrid.

It comes after travel industry experts said the rising number of package holiday illness claims has become an ‘epidemic’, with a whopping 500% increase in recent years.

This is despite the fact travel industry data on global trends reported that the incidences of sickness in holiday resorts have declined in the past few years.

Up to now, the legal costs for overseas package travel claims have not been controlled, which means tour operators have been slapped with huge damage bills, leading many companies to deal with the claims outside of court, rather than challenge them.

As a result, concerns have been raised by travel experts that Britain’s reputation abroad is being damaged and tourists could face higher package holiday prices.

UK Minister of Justice, Rory Stewart, said: “Claiming compensation for being sick on holiday, when you haven’t been, is fraud.

“This damages the travel industry and risks driving up costs for holidaymakers. This behaviour also tarnishes the reputation of British people abroad. That is why we are introducing measures to crack down on those who engage in this dishonest practice.”

The Civil Procedure Rule Committee has agreed to the new rules, which will see tour operators paying fixed costs depending on the value of the claim and the length of proceedings, which allows package holiday companies to challenge fake claims.

British Ambassador for Spain, Simon Manley, said: “The issue of fraudulent sickness claims has rightly caused concern in Spain, and has had a serious impact on Spanish hoteliers…

“Almost 19 million British tourists visited Spain last year and, whilst the vast majority of holiday makers will not make false claims, these steps will help to deter those that might be tempted to do so.

“As our travel advice says, making a false claim could result in legal proceedings in the UK or in Spain.”

The new rules are set to be in place ahead of the summer season.