A BRITISH expat family have launched a fundraising appeal for the father to receive potentially life-changing treatment for his Multiple Sclerosis in Russia.

Paul Morrison, who moved to Andalucia with his family eight years ago, was diagnosed with MS last year.

The builder had moved his family from Rochdale to Almeria for a new life in the sun.

“I remember having a conversation with him”, his dad Phil told the Manchester Evening News, “he told me if he was going to work, he’d rather do it in the sun.”

Paul continued to work as a builder in Spain, while his wife Claire was a full-time mum to their children.

The 6ft builder was ‘never off his feet’ and worked six days a week to make sure his family were well looked after. 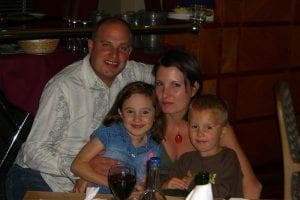 But last year, Paul was diagnosed with the debilitating neurological condition MS.

The 45-year-old can now barely walk with crutches, struggles with memory loss, and has blurry vision in one eye.

He has been unable to work since the diagnosis.

His wife Claire has had to become a full time English teacher to provide for children Charlotte, 18, Ben, 16 and Alvaro, 7.

Claire told MEN: “It was awful when he was told he has got MS, it’s just been a rollercoaster since that moment.

“It’s like he’s a different person, a different man, different dad. It’s just heartbreaking to watch someone that you love go through this. He puts on a brave face, he’s a very proud man.”

Paul was diagnosed in April last year after feeling unusual pain in parts of his body and complaining of not being able to feel his toes.

“All the family knew something was wrong,” his dad Phil told MEN. “We just didn’t know how serious it was. It’s so difficult, it’s frustrating. You wouldn’t think he was the same person.

“He is in so much pain now that sometimes he stays in bed for four days.”

The next step is a wheelchair.

His one chance of getting better lies in a  stem cell treatment in Russia, which can help stop the disease and improve symptoms.

It wipes out the immune system and builds it back up from scratch, and is the only hope of giving Paul a fighting chance to be a normal dad again.

The treatment isn’t available on the NHS in the UK.

According to the MS Society website: “HSCT aims to ‘reset’ the immune system to stop it attacking the central nervous system. It uses chemotherapy to remove the harmful immune cells and then rebuild the immune system using a type of stem cell found in your bone marrow.”

The treatment is actually designed for patients like Paul, who have relapsing remitting multiple sclerosis, meaning they have a chance for the immune system to have a reboot.

“This is his only chance”, Claire said. “This is our only option, if you can hit it early it can make such a difference.”

Paul is booked in for an appointment in August in Russia, and the family are urgently fundraising to pay for the treatment.

You can donate here: https://www.gofundme.com/paulsfighttowalk