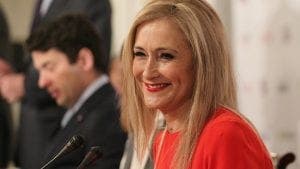 PRESIDENT of the region of Madrid, Cristina Cifuentes, has renounced her masters qualification and apologized to the university amid fake degree claims today.

The PP politician sent a letter to the dean of the Universidad Rey Juan Carlos (URJC), Javier Ramos, in which she insists she ‘has not committed any illegal act’ and complied with everything the university asked of her to achieve the masters.

In the letter, the Conservative politician claims she has all documents to prove payment of fees and qualifications she obtained but blames the university for ‘various administrative irregularities’, which she said were ‘totally unrelated’ to her and have affected the credibility of her degree.

It comes after Spanish media broke the news that the regional leader failed to complete a masters degree in public law.

But when she attempted to challenge the allegations, Cifuentes claimed she had ‘misplaced’ her thesis, while the university was also unable to release a copy of the certificate.

URJC dean, Ramos, sent the masters certificate to Cifuentes via email in March but then opened an investigation into the credibility of it just 19 minutes later.

Last week Ramos admitted there had been ‘irregularities’ in the administration of her degree after it was revealed a signature on the certificate could have been forged and would strip her of the masters title.

Cifuentes also said when she started her degree she was ‘dedicated’ but after being appointed president of Madrid, she was unable to keep up with the course timetable.

The politician claimed she made a private agreement with university tutors to accommodate her new busy schedule, in which she did not have to attend classes or take exams with other students.

Meanwhile, General Secretary of the opposition PSOE party, Pedro Sanchez, said Cifuentes’ decision to renounce her masters was ‘necessary but not enough’ and has called for her resignation.

He told Spanish radio station, RNE, that there needs to be a change in the government in Madrid.