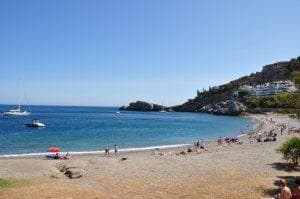 A PARAGLIDER has died after plunging into the sea in Granada.

The incident occurred at 12.10 yesterday when several witnesses alerted the local rescue center after watching the person fall into the water close to Playa de La Herradura in Almuñécar.

Witnesses said the paraglider was overwhelmed by strong currents.

The Guardia Civil revealed the person had died after being rescued from the water.

An investigation has been opened into the circumstances of the incident.

Walter Finch - 3 Feb, 2023 @ 15:00
A violent mugger who robbed a woman by putting her in a choke hold until she lost consciousness is on the run in Sevilla. Security...