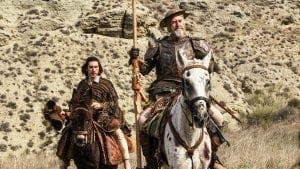 IT took three decades to get there… and the lives of two leading men.

Appropriately dedicated to the memory of John Hurt and Jean Rochefort – who had both previously taken the role before disaster struck – it had its premiere at the Cannes Film Festival last weekend.

And true to form Monty Python director Gilliam almost didn’t make it after he had a stroke just two weeks before.

But he was there proudly showing of his film alongside Pirates of the Caribbean star Jonathan Pryce and Star Wars actor Adam Driver.

After securing financing for the movie 29 years ago, Gilliam was plagued with illness, the death of actors, flooded sets, lawsuits and insurance difficulties.

So feted was the film, that in 2002 Gilliam released the documentary, Lost in La Mancha, featuring Johnny Depp and Vanessa Paradis, which told the story of one of the abandoned versions.

Even this time it almost had its release delayed after Gilliam became locked in a legal battle with former producer Paul Branco, who claimed his company owned the rights to the film.

Loosely based on the celebrated Spanish novel by Miguel de Cervantes, the 2018 comedy-adventure sees Driver play a cynical advertising director who gets caught up in the delusions of an old shoe-maker, who believes he is Don Quixote.

In what has infamously become one of the most troubled productions in movie history, Gilliam said the constant uphill struggle has been a blessing in disguise.

“It’s taken all those years of marinating in my life to get there.”