UPDATE: Browder has been released after police discovered that the Interpol warrant had  expired

A BRITISH businessman has been arrested in Spain on an Interpol arrest warrant requested by Russia.

Bill Browder, an outspoken critic of Vladimir Putin, tweeted on Wednesday morning that he had been arrested by Spanish police and was en route to a police station ‘right now’.

The London-based hedge fund manager, who was picked up in Madrid, has been battling with Moscow for years.

“In the back of the Spanish police car going to the station on the Russian arrest warrant,” he wrote. “They won’t tell me which station.”

In the back of the Spanish police car going to the station on the Russian arrest warrant. They won’t tell me which station pic.twitter.com/Xwj27xC7Zd

It comes after Browder told MPs in March he believed the Russians would like ‘more than anything’ to arrest him and ‘get me back to Russia and then kill me in the control of their own system’.

The financier has been one of Russia’s most high-profile public enemies and was once branded a ‘serial killer’ by president Putin.

Magnitsky was soon thrown behind bars under what many believed to be false charges and died in jail amid claims he was tortured.

Guy Verhofstadt, the European parliament’s chief Brexit co-ordinator, said: “Worrying that autocratic Russia can get democratic Spain to go after someone fighting to expose Putin’s crimes and those responsible for Magnitsky’s murder.”

“Bill Browder’s rights must be protected,” he added in a tweet messaged to Spanish prime minister Mariano Rajoy. 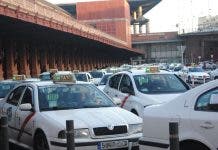