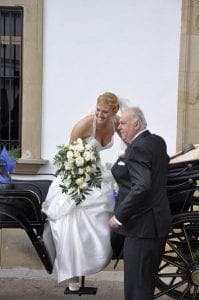 MEGHAN and Harry set the benchmark for wedding wow factor but the Spanish are no slouches when it comes to swanky nuptials.

If our street isn’t knee-deep in horse manure from the back-to-back procession of bridal carriages trotting past our house during the merry marrying month of June, I’ll eat my fascinator.

Even in a village as ‘campo’ as Los Barrios, the guests’ get-ups could pass muster on the manicured lawns of Windsor Castle. Posh? Nothing less than heels the height Victoria Beckham wore to the royal wedding will do – and that even goes for the mother of the bride’s mother. But there’s a pair of flatties in the car boot because not even Sara Baras could dance the Macarena in those all night.

While your typical British bash might respectably wrap up in six hours, the Spanish boda is a 12-hour test of endurance and it has other singularities. Take the wedding present.

Don’t think you can get away with a set of sherry glasses from El Corte Ingles. In Spain, cash is king, whether paid to the chosen bridal gift store, brought with you in a brown envelope to pop in the basket passed round during the reception or, increasingly, wired directly into the happy couples’ bank account. If there’s a long number printed on your invitation, take the hint. 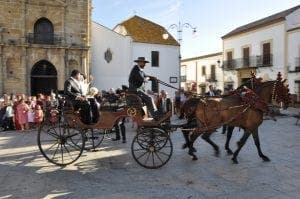 How much? Nothing less than €100 per guest if you don’t want to be thought a tacaño (cheapskate). Your gift should cover the cost of your cubierto (meal and drinks) plus a bit more, a tradition since the days when that was the only way some families could afford a wedding.

The Spanish don’t do small or intimate. It’s not unusual to see half the wedding party gossiping outside the church while the ceremony is in progress because there’s no room inside … or hanging out in the local bar – if there’s one near the church, and in Spain there generally is – because Catholic services do run on a bit …

After you’ve thrown your rice (preferred to confetti) the bride and groom will disappear, sometimes for several hours, for the wedding album shoot, leaving guests to their own devices, usually another bar, so everyone’s well allegre before the party’s even started; or you could go home, have a kip and have to get dressed all over again.

If they ever created an Olympic Decathlon for gastronomy it would look a lot like your average Spanish wedding reception. It starts with cocktails and canapés, progresses through a five-course sit-down banquete and gathers momentum after the sobremesa (coffee and wedding cake) with the dreaded Open Bar.

Cue cigars the size of small rocket launchers to be offered round and copas dispensed in quantities that use up your entire week’s recommended alcohol units in one glass.

Later, it will be time to ‘Follow my leader’ and do a ‘movemiento sexy’ and it inevitably ends up in someone’s swimming pool wearing nothing but your bow tie or tocado (fascinator).

Spanish weddings are marathons, not sprints – a point worth remembering unless you want to be the hilarious anecdote everyone’s talking about next day. ¡Viva los novios!