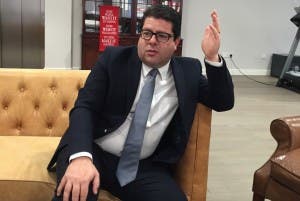 The GSD has questioned in particular the government’s ‘socialist’ beliefs after both the Chief Minister and Justice Minister were linked to Israeli businessman, Dan Gertler, who is currently under US sanction and has had assets frozen for alleged corrupt mining deals and human rights abuse in the Democratic Republic of Congo.

It comes after a GBC investigation revealed that Chief Minister Fabian Picardo was a director of Rozaro Development Limited in 2010 – one of two Gibraltar-based companies linked to Gertler.

It is currently on the US Office of Foreign Assets Control list.

As recently as November 2017 the company was registered at the address of the Rock’s largest law firm, Hassans.

Reportedly, Justice Minister Neil Costa was also once a director of Rozaro, when he was a lawyer in private practice at Hassans. He is yet to comment on the matter.

The GSD opposition party was ‘concerned’ about the close connections to such a controversial figure.

A statement from the GSD reads: “Following on so soon from the Assad/Europort transaction – which involves another individual who is facing serious international allegations – and the involvement of the Isola family trusts in that purchase the public must be questioning the socialist credentials of some of the Ministers.”

Fabian Picardo confirmed in a GBC TV interview that he not only had a professional relationship with Gertler, but had also been involved with the purchase of a Democratic Republic of Congo uranium mine around eight years ago.

The GBC investigation also revealed at least one huge transaction – of $83.5 million (around €72 million) – had been paid into another of Gertler’s companies via a Gibraltar bank account at RBS from African mining giant, Glencore.

44-year-old Gertler, who is reportedly worth more than 1.2 billion dollars (around €1 billion), is also being probed by the UK’s Serious Fraud Office on ‘allegations of fraud, bribery and corruption around the acquisition of substantial mineral assets’.

Gertler and Hassans have denied any illegal activity, while the Chief Minister insisted all deals adhered to international laws.

Last month Chief Minister Picardo was forced to make a ten-minute statement to parliament over the Assad affair and defending the sale of 6-9 Europort.