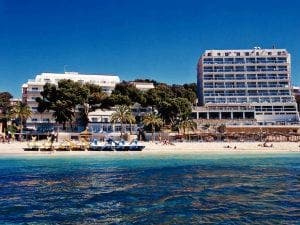 A BRITISH teen has miraculously survived after plummeting 75ft from a Mallorca balcony.

The 18-year-old fell from the fifth floor while celebrating England’s World Cup victory over Colombia.

The holidaymaker was luckily found outside the four-star Flamboyan Caribe Hotel by a kebab shop worker, who immediately called an ambulance.

He has been taken to Son Espases Hospital after being found in a ‘serious but conscious’ condition.

The unnamed England fan is thought to have fallen out from a corridor window at around 1.30am, just a few hours after his team made it through to the last eight of the World Cup.

The Olive Press has spoken hotel but they were unavailable for comment.

Around a thousand Brits descended on Magaluf’s party strip to watch the tense penalty shoot out.

According to reports, the lad’s girlfriend and friends followed him to the hospital in taxis.

Guardia Civil have begun an investigation to rule out foul play, which is routine.

It comes after two Brits, including an expat, plunged to their deaths in June and April of this year.