IT is a well-known fact that Sharia Law, or Islamic religion, is the religious law forming part of the Islamic tradition.

This law governs the lives of Muslims including what happens after death in respect to the distribution of the wealth and assets.

According to Islamic scholars, the inheritance portions have been determined and allotted by Allah in the Quran and cannot be changed although vary according to who is alive at the time of death.

Unfortunately, the law of God and modern western democracies are at times irreconcilable, if we focus on the very first dictate that the male’s portion equals to that of two females.

Recently, the Directorate General of Registrars and Notaries (DGRN) in Madrid rejected a Deed of Acceptance and Adjudication of Inheritance of a deceased Iranian national specifically because the share distribution allotted to the sons doubled that of the daughters, in accordance to the law applied to the inheritance -article 907 of the Civil Code of Iran- .

The DGRN invoked article 12.3 of the Spanish Civil that states that ‘in no event shall foreign law apply where it is contrary to public policy’, arguing that it was against public policy because it infringed substantial Constitutional legal precepts as well as treaties on international human rights, as for example prohibition of discrimination of grounds of gender.

Interestingly, the DGRN rejected the discriminatory rule even after the daughters had stated that they had ‘freely and without coercion’ accepted the ‘divine’ allocation of assets.
Other Islamic inheritance principles will probably suffer the same fate should they be closely scrutinized; for example, the express prohibition for Muslims to inherit from non-Muslims, and vice versa, in intestate inheritances. And it goes without saying that “apostates” that under Shariah will lose their rights to testate but also to inherit, will not have such effects recognized on Spanish-based assets. 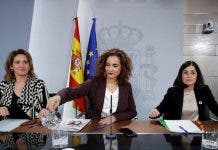