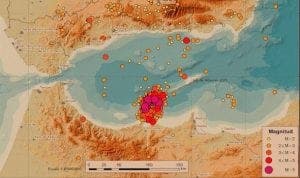 A NEW tectonic fault has been discovered by Spanish scientists and it could be behind deadly earthquakes.

Geologists unearthed the fault under the westernmost part of the Alboran Sea following an expedition led by the Higher Council for Scientific Research (CSIC) and the University of Granada.

The findings have now been published in scientific research journal Tectonic, warning of potential new geological risks in the area around the Alboran Sea.

The Andalucian scientists believe the new fault zone was the cause of a 2004 quake which killed more than 600 people with a magnitude of more than 6.3 in Al Hoceima, north Morocco.

They also believe it was behind strong seismic activity between 1993-4.

According to the study, the fault line could still trigger relatively high magnitude earthquakes such as the 6.3 earthquake which rocked Melilla and several areas of Andalucia on January 25, 2016.

It also warned that the growth of recently formed faults could cause higher magnitude earthquakes in the ‘Gibraltar arch’, between Iberia and Africa, as well as the Campo de Dalias region in Almeria.