THE mother of a Malaga fisherman who disappeared two days ago has said she has ‘lost all hope’ of finding her son alive.

Mother Marin Jimenez, 49, said she is ‘broken with pain’ as she made a statement alongside her husband and 10-year-old son.

“After two days, we have lost all hope of finding him alive,” she said, “I only hope we can recover the body, although I would release it back into the sea.”

Her other son, Fidel Jimenez, 23, vanished while spear fishing from a boat on Sunday with two of his friends.

He was fishing around eight kilometres from the coast of Barbate, in Cadiz.

“The submariners of the Civil Guard GEAS have told us that on Wednesday in the first hour they will resume the search, and that they will also continue on Thursday,” the mother added.

“If the body still does not appear, only the maritime and aerial searches will continue, since the body, after 72 hours, usually comes afloat.” 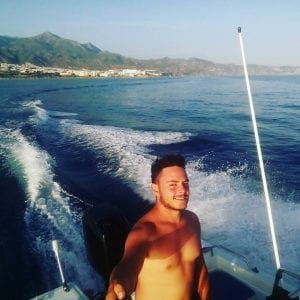 Fidel’s mother described her son as being ‘truly passionate’ about the sea and underwater fishing.

“It was his only passion, he had been diving since he was 10 years old, he had done several courses, both with oxygen cylinders and in free diving,” she said.

“His friend Juan Toro, who was with him at that time, also from Vélez-Málaga, is helping us all.”

She added how the other young fisherman jumped into the water to try to rescue her son when he saw that the body was floating face down and unconscious.

“They were just a few seconds, he was less than a meter away from reaching it, but the force of the current, and the weight of his belt and equipment meant he quickly sank”, she said.

The young diver had left Spain for Bristol in the UK last year to work in the hospitality industry and improve his command of English.

He returned to Velez-Malaga in May and moved to Barbate in June, where he spearfished in the morning and worked at a pizzeria in the afternoons.

“I had already been in that same area a few months ago, the photo that exists in social networks with a big fish is from there,” the mother said between sobs.

“Everything he fished he brought to the house, he did not engage in underwater fishing as a business,” added the mum, who recalled how herself and her husband visited the young man in Bristol in January.

“He was fine there for about six months, but he could not stand so many cloudy and rainy days, he needed to turn south,” she added.