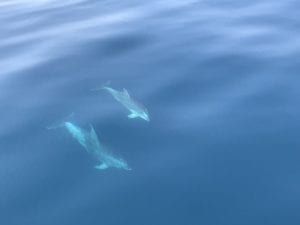 between Spain and Morocco in the deepest part of the Straits of Gibraltar.

Flying fish, turtles and two types of whale are basking around, feeding and luxuriating in this food-rich marine paradise, some 15 minutes offshore from Tarifa.

And that’s not to mention the dolphins, including a pair of Bottlenose, who are shepherding their calf, that is apparently no more than a week old.

Soon we have found a school of dolphins swimming around the boat and, being so calm, we can see them clearly under the water.

It’s an almost religious experience for the boat-load of tourists, as the stunning mammals clearly swim over to take a closer look at us.

“These two are particularly inquisitive,” pipes up a voice from the cockpit above, as one particular pair come sniffing up to the boat, then swim underneath at an amazing speed.

The words come from Dr Katharina Heyer, a remarkable woman of 75 years of age, who has become, without a doubt, one of the world’s authorities on sea life off the tip of southern Spain.

It’s her 20th year working with her company Firmm, which was set up after she was guided to Tarifa to see whales and dolphins by a ‘spiritual man’ in 1998.

Then running her own fashion company in Switzerland, she visited the area to find nobody organising trips to see the mammals and almost no research on them. 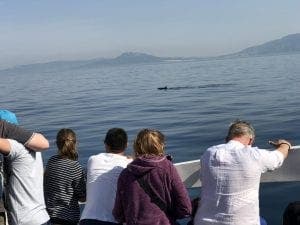 “I arrived on a really rainy, awful day to find no whale boats, just fishermen, and had to rent a diving boat to take me out,” she explains.

It may not have been perfect weather conditions, but what she saw completely changed her for good.

While she had long enjoyed diving holidays with her teenage sons in the Caribbean and the Maldives, seeing a group of Pilot whales and Bottlenose dolphins had a strong and immediate impact on her.

So moved was she by these large and graceful mammals that she quickly moved out to set up her ‘respectful whale watching’ company in Tarifa and has never looked back.

Indeed, so respected has been her research into the mammals over the last two decades – in particular her sensitization work for them – that last year she was awarded an honorary doctorate from the University of Basel.

There are now a handful of companies taking visitors out to see the mammals from Tarifa, and on most days they can expect to see Sperm whales, Pilot whales and even Orcas, not to mention various types of dolphins and many other fish.

It is one of the best places in the world to see them, with the currents bringing a lot of food from both directions, explains Katharina.

However, this brings in itself severe risks, as they are entering one of the busiest waterways in the world with more than 300 freighters and other sea traffic passing every day.

Indeed, as you look out into the Straits you are witnessing a battle for survival.

“The lives of dolphins and whales are at risk from ferries getting faster and faster, the noise from shipping traffic and more,” she explains.