A BRITISH teenager has been left critically ill and is believed to have been poisoned by pesticides during a family holiday in Alicante.

Callum Forster, 17, from Leeds, is currently heavily sedated on a life support machine in a Torrevieja hospital after suffering seizures, reported the Mirror.

It comes after the teen and stepdad, Jamie Hadland, 24, were both rushed to hospital with an unexplained illness after a family night out on Friday July 20.

It is believed doctors said it was likely the pair had ingested cockroach or ant killers, after finding pesticides in their blood.

Hadland has since been released but hospital officials have still not been able to explain the victims’ reactions.

The incident occurred while on a family holiday with mum, Helen Forster, 36, and brother Brandon, 12, after they had met friends at a bar in Villamartin.

Mother, Helen, told the Mirror that her son started to feel unwell within ten minutes of getting back to their accommodation.

She added that ‘it was so scary’ to watch the teen having ten seizures before the ambulance arrived.

Helen said: “He is very confused and is struggling to answer questions, we don’t know what impact the seizures have had on him yet.

“We’ve been told the recovery could take weeks or months. We just have no idea.”

Family friends have since put together a Just Giving page, which has already raised almost £2,500, to help the family stay in Spain and be by Callum’s side.

Close friend, Jayne Rapier, said: “As a result of this awful ordeal his family are now stuck in Spain for a number of weeks until he is better, we have put this page together to ask all there friends and family to help raise funds to make this ordeal a little easier and support them and enable them to stay with Callum until he is well enough to come home.” 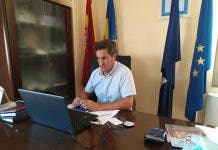