A BRITISH drug lord has been snared after €16 million worth of cannabis was found stashed in a Costa del Sol home.

The huge haul was discovered in a home in the Marbella seaside town of San Pedro de Alcantara last week.

A total of 11 people – nine men and two women – have been held, including Brits, Moroccans, Spanish and Irish nationals.

The drug traffickers have been accused of using boats to smuggle the cannabis into southern Spain from Morocco.

Cannabis, cocaine and ecstasy were seized along with a frequency jammer, bundles of cash, a gun, nine vehicles and 25 mobile phones.

The probe began after a van carrying narcotics rammed cop cars during a chase.

Footage of the raid showed bundles of euros and pound sterling as well as a pistol.

A Policia Nacional spokesperson said: “Officers have smashed a criminal gang operating out of Marbella and the nearby town of Estepona which was smuggling cannabis into Spain using boats so it could be sent on to other places.

“In this operation 11 people – nine men and two women – from Britain, Ireland, Morocco and Spain have been arrested on suspicion of drugs trafficking and membership of a criminal organisation.” 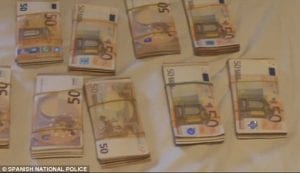 He added: “The operation began in March when officers were tipped off about the existence of a group of Moroccans and Spanish nationals who were smuggling drugs into Spain on boats.

“At the end of May one of the suspects was spotted driving a vehicle through Estepona.

“Suspecting he could be carrying drugs, he was followed until the driver realised he was being tailed and tried to escape.

“After a chase in which he rammed several police vehicles, he was held and it was confirmed he was carrying cannabis.

“The following day another suspect was located in San Pedro de Alcantara. Officers intercepted the van he was in and discovered 35 packs of cannabis resin and arrested him.”

On the British leader of the group they said: “During the operative to identify the members of the criminal organisation, the police located a group of people from Britain and Ireland and confirmed they included the gang leader and another four members of the organisation.

“They were arrested and the gang leader’s home in San Pedro searched.

“Officers seized 150 packs of cannabis resin, a kilo of cocaine, 208,000 euros (£186,000), and a pistol with ammunition which was hidden in the secret compartment of a wardrobe.

‘”he last phase of the operation led to the arrest of another four members of the organisation.