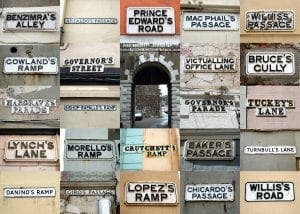 BRITISH Bobbies are famous for knowing every street on their beat but they have their work cut out in Gibraltar.

At 6.7km2, it’s not a big place to get lost in but things can take a complicated turn in a bilingual territory where most streets have two names.

Take Calle Real, Gibraltar’s famous shopping street. Nope, I’d never heard of it either but I nearly fell out with our Spanish plumber who was equally insistent there was no such place as Main Street. And a word of warning – Main Street does not translate into Calle Principal, nor Calle Real into Royal Street, unless you want to end up in queer street arguing about four streets.

Before the British arrived, Gibraltar’s streets had colloquial names made up by the locals, usually after some activity or landmark. There were no street signs so for generations everyone simply knew them by word of mouth. It wasn’t until 1870 that English names were given and signs put up but by then it was too late. The Spanish had stuck. Indeed, Calle Peligro (Danger Street), notorious for its disease-infested brothels, was expressly renamed ‘New Passage’ so that visiting sailors couldn’t find it.

It caused such confusion for newcomers in the early days of the British garrison that a code book of street names had to be drawn up to prevent messages falling into the wrong hands.

Some streets gained multiple names as the landscape changed. There’s a great new vegan restaurant called the Kasbar in Castle Street, if you can find it up a steep alleyway aka Calle Comedia after its 19th century burlesque theatre and Calle de la Cuesta because of the slope.

Gibraltar’s second largest square has had at least 14 different names since its Moorish heyday including Alameda, The Parade, Commercial Square, Plaza Mayor and Plazuela del Martillo. The insistence of some Gibbies on still calling it the Piazza rather than John Mackintosh Square, its current name, had me running round in Google map circles and late for an interview.

Governor’s Street is also Calle Cordoneros after the Catholic Brotherhoods who shopped for their Holy Week robes there in days gone by. Tuckey’s Lane (after a local bigwig) is also Callejon del Jarro (Jug Alley) after a long-defunct wine merchants. Library Ramp, known as Ball Alley after a racquets court, is pronounced ‘El Balali’ – that’s Llanito, a kind of Spanglish patois that the Gibraltarians also speak! It’s easy to see how the ordinary man in the street could get totally lost.

However in a street-smart move of its own, Gibraltar Tourist Board has turned administrative chaos into a heritage walking trail with street plaques giving explaining their curious origins. Everybody wins. Gibraltar gets a new tourist attraction, visitors are less likely to suffer the ignominy of getting lost on a tiny rock and the Royal Gibraltar Police can reserve their built-in GPS for more pressing frontier business than the whereabouts, or not, of Royal Street.