AS Málaga pushes the boat out to win Intangible Cultural Heritage status for its iconic espetos, the OP samples the province’s other UNESCO-worthy fish dishes with fin-esse. 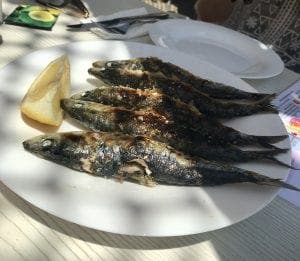 Nothing says summer on the Costa like espetos. Rows of silvery sardines roasting on bamboo skewers poking out from blue fishing boats add to the theatre of dining and turn a shoreline paseo into pure aromatherapy. The custom began with famished Phoenician fishermen in need of cheap fast food after a long day at sea. Malgueño Miguel Martinez Soler, aka The Sardine Man, added the Royal Approval when King Alfonso XII stopped by his humble chiringuito in 1884 and pronounced them royally finger-lickin’ good.

Simple yet delicious, add a splash of olive oil and a sprinkle of salt to enjoy Malaga’s hot heritage fish dish. 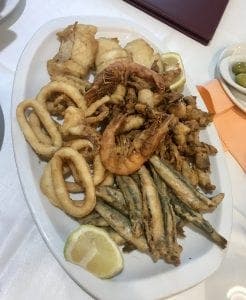 This crispy seafood cornucopia is one of Malaga’s guiltiest pleasures but be damned to the calories. For a crunchy concoction of deep fried anchovies, cod, calamari, prawns, baby and baby octopus, finished off with a zesty squirt of lemon, it’s worth the extra trip to the gym. Despite the cooking method, fritura is never greasy. The secret is in the combination of extra virgin olive oil and flour to produce a dry crust that crumbles in the mouth. 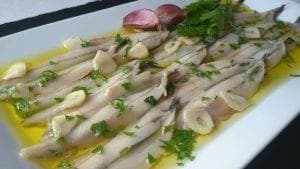 Don’t call them anchovies (or anchoas)! Boquerones have been nowhere near a pickle factory or a can. They are fresh-from-the-sea anchovies marinated in olive oil, vinegar, parsley and garlic and a top tapa treat when the real thing.

The first recipe dates back more than 3000 years, the Tartars,  Phoenicians and Romans improved on it and the 17th century Malaga poet Juan de Ovando mentioned it in an ode. Since the 18th century, their importance in Malaga culture has been discussed at the Real Academia Española and the 19th-century novelist Pedro Antonio de Alarcon wrote that Malaga was home to the ‘best anchovies in the world’. Gastronome Dionisio Perez added, “There’s only one type of anchovies, which are fished from Estepona to Malaga”.

Locally aka boquerones victorianos in reference to the best month to catch them, September is also dedicated to the Virgen de la Victoria, patron of Malaga. 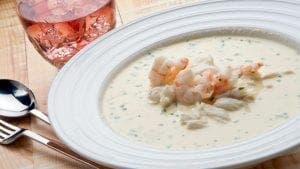 While the name might sound like Andalucia’s famous chilled tomato soup, this winter warmer bears little resemblance to summery gazpacho. The original recipe, a chowdery mix of fish, potatoes, water, salt, mayonnaise, and wine vinegar, was created by the poor fisherman of El Palo, the same Malaga fishing village where King Alfonso XII enjoyed  his sardines – maritime gastronomy clearly runs in the blood. In time, shrimp, langoustines and clams were added, along with a hard boiled egg garnish and toast to turn it from a stick-to-the-ribs staple into a culinary classic. 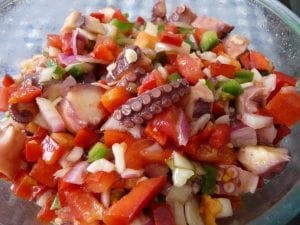 The Mediterranean Diet in a salad. Refreshing and nutritious, it was originally a simple mix of leftover veggies but it has become a staple of Malaga cuisine. Different regions add their own  gastronomic twists depending on what grows in their garden but the Malaga version majors on tomatoes, red and green peppers, garlic, onion, olives, tuna, mussels and other assorted seafood dressed in – what else but – olive oil and sea salt. This summery salad is both easy and economical to make! 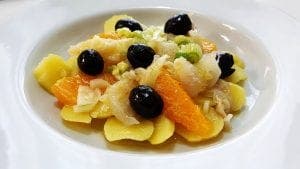 This refreshing Spanish twist on potato salad is made with salt cod, onion, green olives and the juice of succulent Sevilla oranges. Perfect for warm weather, it’s full of distinct flavours that mesh together well, showcasing Malaga’s famous Mediterranean fish and veggies in a light, citrusy dressing. The cod is the star while Aloreña olives, native to Malaga, add the tang of bitter rounding out the flavour of the dish.