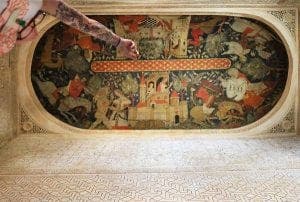 TEN years of restoration work on the famous Alhambra have led to an historic discovery.

An artistic ‘jewel’ in Granada’s iconic palace has been unearthed following a ?€3 million conservation project.

The fresco-style paintings, found in three 15-metre vaults of the Sala de los Reyes (Hall of Kings), are said to be one-of-a-kind worldwide due to the artistic techniques used.

Portraying illustrious figures from under the Nasrids’ rule – the last Muslim Arab dynasty in Iberia – the works were commissioned by Muhammed V of Granada, using leather, ceramics, glass and plasterwork.

Coordinated by the Alhambra Conservation Service and the Andalucian Institute for Historic Heritage, the decade-long restoration project needed an epic team of architects, chemists, art historians, biologists, conservators and more.

Since work was last carried out by Rafael Contreras in 1855, the paintings rapidly deteriorated due to water leaks from the roofs which have now been corrected.

Curiously there are no sources from the Nasrid dynasty era which can explain the scenes illustrated in the masterpieces and do not reflect depictions in Islam, making the art truly unique.

The side arches depict cavalry, hunting and courtesans, while the central arch shows a meeting of the first ten kings of the Nasrid dynasty – the fall of this ruling marked the end of the famous Al-Andalus.