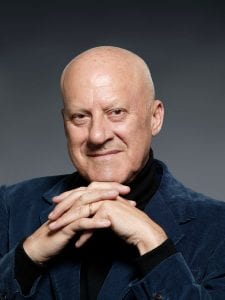 BRITISH ‘starchitect’ Norman Foster is making his mark in the heart of Madrid with a see-through glass box called Axis.

The cube-shaped steel and glass structure will harness solar power to turn the capital’s 2.769 hours of sunshine into energy and allow trees and plants to grow indoors.

The complex of shops and offices topped with an open-air sky terrace will transform a 1970s building in Plaza Colon once home to Barclays Bank into a green icon, promises the Prtzker Prize-winning owner of Foster + Partners.

“Situated at one of the most important intersections in Madrid, Axis is a new landmark for the city that reflects the prestige and importance of the site,” Foster explained.

“It establishes a new vision for the existing 1970s structure, stripping it back to its essence and creating a flexible, future-proof building that will endure. Its striking façade will also nurture a new identity and sense of place for the city of Madrid.”

The four-storey building’s diamond-shaped glass and stainless steel façade is adapted for Madrid’s climate, pulling light, life and greenery inside. A soaring atrium connects shops on the ground floor with the offices above, crowned by an open-air rooftop terrace and garden – a rarity in Madrid.  The optimised geometry of the slightly slanted cube design responds to structural efficiency, minimising energy and material consumption.

The iconic edifice – Foster’s second in the city along with the Torre Cepsa – will join other statement buildings around Plaza Colon, named after Christopher Columbus.

It will sit on Paseo de la Castellana, where the neighbourhoods of modish Salamanca, Chamberi and Centro meet, in view of a statue of the great explorer and close to the extraordinary Torres de Colon, twin towers nicknamed El Enchufe because of the plug-like structure binding them together.

Axis is expected to be open by next summer.