“AS much as you go to the police, you will not find her… no matter how much you look for her, you will never see her again.”

These are the chilling words found in the Instagram inbox of a missing teenage girl in Spain.

Josefa Sanchez Cortes disappeared more than 24 hours ago after her school rang her parents at 1pm yesterday to say she had not arrived to class.

But 12 hours later, the family of the 14-year-old, based in Mallorca, found a message on her Instagram, which is only accessible via her brother’s iPad.

It told the desperate family that they would never see Josela – as they call her – ever again.

The minor, who attends Jesus Maria school in Palma, is 1.70 metres tall and weighs 68kg.

She has long brown hair and brown eyes.

At the time of her disappearance she was wearing her navy blue school tracksuit, a light blue shirt and white sports shoes.

She is described as a teenager who never goes out with friends, only with her family. 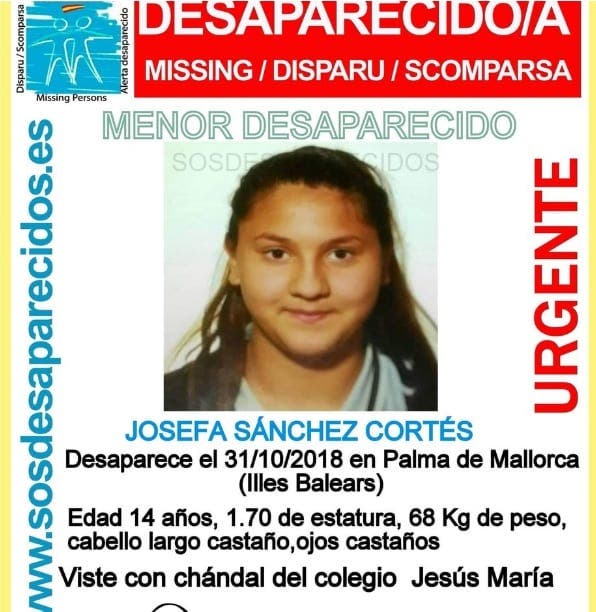 The family do not let her go out alone, not even to the cinema, according to mallorcaconfidencial.com.

According to her aunt, the teen always takes the same route when she goes to school.

They live in Son Oliva and leave the house, on Isaac Albéniz street, at 7.45am and within 10 minutes arrive at the Jesús María school.

“At about 2pm she eats, takes a nap, and then goes to play with her cousins downstairs, she does not go out with anyone,” her aunt Josela said.

Police are working with the theory that the child met with someone she has been talking to through Instagram.

The mother of the missing child is ‘totally destroyed’.

“They have had to give her pills, because she does not know what to do,” said a relative.

The family have appealed to the minor or to the people she has met, saying: “Do not be afraid to come home”.

“We have gone out to look for her everywhere and we are desperate,” added another aunt of the minor.