A BRITISH man is missing on the Costa del Sol after a night out with two pals ended in a car crash and a brutal stabbing.

The three friends, from Liverpool, were staying in Benalmadena when their two-week lads’ holiday went awry within hours of arriving.

Police were called to Benal Beach apartments in the early hours of October 27 after the oldest of the three, aged 43, was allegedly stabbed by the youngest, aged 28.

The 43-year-old was stabbed in the shoulder blade, hands and legs.

He was transferred to the Clinical Hospital but luckily the injuries were not serious and he was discharged a few hours later.

The third friend told police he had decided to stay in that night, and lent the other two his Nissan Juke rental car.

Hours later the youngest of the trio allegedly returned alone and was ‘very nervous and aggressive’.

When the friend asked him where the car was, he replied ‘over there.’

The friend went out to find the rental car crashed and damaged on the side of the road.

When he returned to the apartment, he found his other friend bleeding after the youngest had allegedly stabbed him and fled.

The stabbing victim said he had come back to the flat and found the attacker in a ‘super aggressive’ state.

He claims he tried to calm him down but an argument led to the assault.

The assailant is still missing and his whereabouts are unknown. 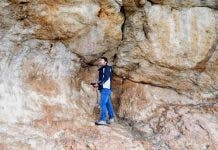