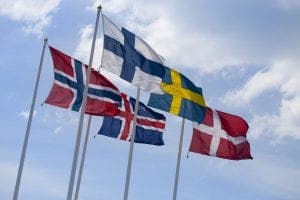 FOR years, the Scandinavian property market has seemed not merely buoyant but shock-resistant.

The latest signs, however, cast a shadow over more growth in the short term as experts predict that one of Europe’s most dynamic real estate markets could be set for a correction.

We tend to think of Scandinavia as the doyen of social democracy, liberal politics and humanistic ideals – a reputation derived from half a century of leading the world in progressive thinking.

One manifestation of this socially responsible attitude was the fact that housing has traditionally been viewed in Scandinavian countries as a social benefit rather than an asset class. As a result, successive governments have tried to tame the real estate bull and stop it from becoming a volatile medium of speculation.

But it seems, the long battle was finally lost around the turn of the century. Property markets in Scandinavia are no longer purely concerned with housing and have become popular forms of investment.

Add reasonably buoyant economies in recent years, along with rapid population growth through immigration, and the housing markets of Norway and Sweden in particular have spent most of the past decade expanding rapidly in sales, construction and prices.

This is as true for commercial real estate as it is for residential, and has been most marked in the capital cities of Stockholm and Oslo, the latter being the fastest-growing metropolis in Europe for some time now.

The dynamism was such that an area often overlooked by international investors now attracted them in numbers, and the result has been visible in a level of growth and price rises that were, inevitably, hard to sustain.

In Sweden, for instance, property prices have risen by over 50 per cent in five years and are now 70 per cent higher, on average, than during the pre-crisis peak. It seems too much hot air has flowed into the Scandinavian property balloon. This has lead analysts – including those at Goldman Sachs – to predict a corrective contraction in the market in the short term that they believe will be followed by a period of relative stasis.

In other words, for now the dynamism is out of the Scandinavian property markets and you’d better look elsewhere for opportunities.

That said, the predicted 10 per cent drop in property values is indeed a correction, not a full-blown crisis. However,  the problem lies not only in overly high property values but also in the more worrying phenomenon of high indebtedness. It’s another characteristic we would normally not associate with Scandinavian countries. But the easy hand-out of mortgages and other forms of financing over past years has led to rising levels of indebtedness – now at its highest level since Scandinavia began recovering from its banking crisis back in the early 1990s. Debt-to-income ratios have been climbing steadily, and in 2016 the Swedish authorities decided the time had come to curb what it saw as a potential threat.

Sweden had been creating its own future subprime situation by inverting the lending to repayment situation. Stricter new mortgage repayment regulations were introduced that increased cash deposit contributions in property purchases and forced lenders to pay off the principal more quickly. It proved decisive for the market which, without the turbo-boost of previous years, all but ground to a halt.

There’s a delayed reaction between supply/demand factors playing out and prices responding to them. But already, prices have begun to fall, and now it seems the Scandinavian property sector has some difficult years ahead of it due to a controlled/induced slow-down that may have averted a bigger crash.

Having said this, some experts are more positive about the outlook for the Scandinavian property market, arguing that macro-economic indicators combined with the prospect of long term low interest rates and low unemployment mean a much softer landing is in store for the market.

What it means for the rest of Europe

Those Scandinavians with cash and equity – and there are still many – will simply turn their attention away from their home markets and focus more on opportunities elsewhere, in countries such as Spain, for instance.

The Scandinavian economies are still performing well, so the slow-down is largely limited to the property and construction sectors, though it will of course also have an impact on banks. As always, the lower to medium end of the market is most strongly affected, among them first buyers, so more affluent buyers will find cash purchase opportunities at home and attractive investment opportunities overseas.

Ikea sales in their home market might drop too, but for the likes of Spain the situation in Scandinavia could actually herald an opportunity to draw even more Scandinavian buyers to its warm shores.