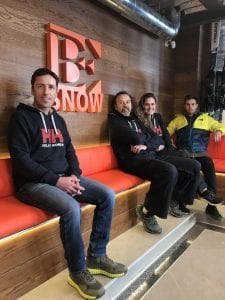 HAVING whizzed around the world as a professional jet skier David Selles has slid onto the Sierra Nevada slopes with an exciting new business.

The seven-times World Champion, from Benidorm, has opened a ski shop and school in the heart of Pradollano.

Be Snow is the culmination of a three-year search for the perfect way to make a living on the slopes.

“Since buying a home nearby some years ago, I haven’t stopped looking,” Selles, 48, tells the Olive Press.

And when former ski shop Pascual Ski, in Plaza Andalucia, came up for sale he jumped at the option.

Now half a year later he has finally opened with a stylish new urban look, with a few of the former staff and with tens of thousands of euros of brand new equipment.

“We’ve got 650 new pairs of skis and 800 pairs of brand new boots,” he boasts. “It is the most important thing for anyone wanting to guarantee to have fun on the slopes.

“Top class skis with fantastic edges and the most comfortable boots you can find. We can promise that.”

It has been an exciting couple of decades for the father-of-two, whose Brazilian wife, Alyne, often helps out in the shop.

After growing up in Finistratt, near Benidorm, he took up the sport of jet-skiing and won his first world championship in Crete in 1997.

He then competed around the world in countries as diverse as Japan, Canada, Alaska and Chile, before winning his final championship in Marbella in 2008.

It was a pretty full on two decades and, technically, he was not allowed to ski during all the time as a professional.

“Contractually my sponsors would not allow it, but – of course – I couldn’t resist and came quite a few times incognito,” admits the businessman, who first skied in Candanchu at the age of eight.

“Now I couldn’t be happier. This is my passion, not a business. I get to ski every day and make a living at the same time,” he concludes.