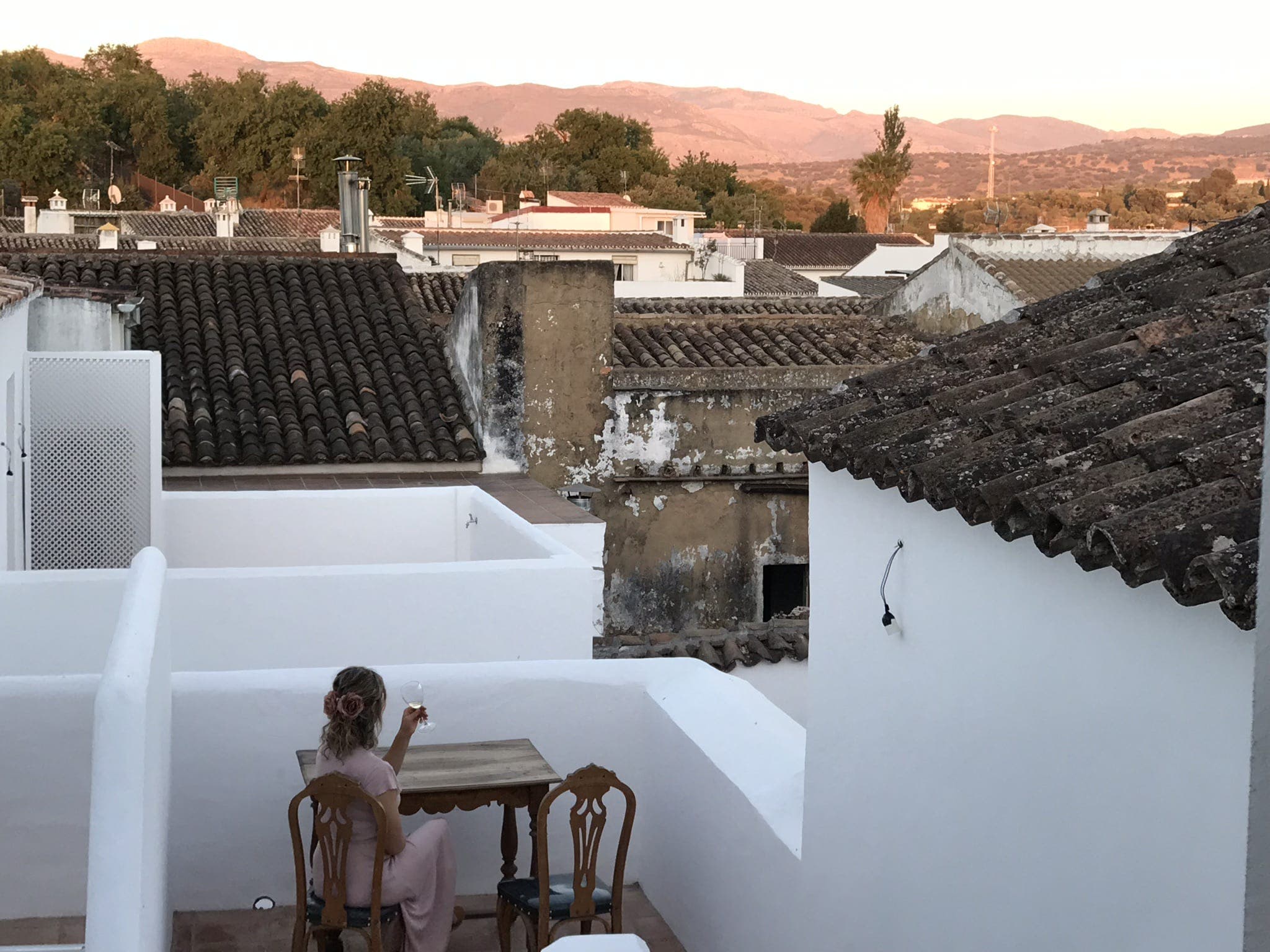 IT started as a search for a modest bolthole in Ronda to live in during the holiday season when our country house is rented out. Then I stumbled across an enormous old school and it was love at first sight.

It was not even on the list of properties I was being shown and it certainly didn’t fit my criteria, but I could not walk past without taking a peek inside.

I persuaded the agent to show me the historic old town pile, even though I had absolutely no
intention of buying it.

The beautiful stone portico and heavy wooden doors opened onto a porch the width of the entire hallway with a beautiful wrought iron decorative arch above them.

Very much the Andalucian vernacular, this was the way centuries of owners used to bring their animals in from the fields at night.

And off we went through a warren of rooms entered through ornate ochre-painted wooden doors.

Some of the rooms were tall and grand with ceiling rosettes and romantic vaulted ceilings.

All the windows onto the street were arched and crowned with solid metal rejas in the classic Ronda style.

A narrow stairway climbed into a cavernous loft space where the metal roof beams still bore the hooks used for curing hams, a string of garlic still dangling from one of them. Strewn around were boxes full of rags, as well as a 1990s National police uniform!

Like much of the house it had lovely terracotta barro floors, alarmingly bowed in a number of places.

Doors from the internal courtyard led to a large external yard, chicken and pig sheds, a back kitchen and even a small stable.

Every space detailed the lives of those who had once inhabited the house, set in the ancient Barrio de San Francisco – dusty furniture, baskets, pots, pans, tea sets, rush chairs, beds, framed prints of Saints and ancient family photos.

And all around were views across the rooftops of Ronda’s casco historico to the fabled Serrania de Ronda mountains.

Apart from a new roof, this protected 315-metre-square building had remained untouched for about 20 years… and needed a complete renovation.

I rang my husband immediately and told him I had fallen in love … but thankfully for him, only  with bricks and mortar … and insisted he came to see it the next day.

On closer inspection it turned out to be a former home of the legendary 18th Century bullfighter Pedro Romero, the very man who constructed Ronda’s nearby bullring – Spain’s oldest.

Painted by famous painter Francisco Goya, the ‘godfather of modern bullfighting’ was born in the same street and the torero’s crest is indeed carved into the stone portal, as with a number of other buildings around the town.

Dating from the 1780s, it was later bought by a local aristocrat who generously gifted it to one of his trusted labourers and, from that point on, it became a home to farming families.

At some point, part of the building became a local school and later a bar, while during the civil war it served as a temporary hospital.

Realising it was entirely unsuitable, I continued to see other properties, smaller but a better fit, and even made offers on two.

But nothing worked out.

Meanwhile, my mind kept returning to the old school house, besotted (as was my husband) with the romance of its past, mulling over its potential.

And finally, I saw how it might actually work for us… being divided into five apartments, each with their own private terraces, with scope for a communal garden and even a swimming pool.

Double the investment – and a far greater risk, since it would involve re-mortgaging our own home – it would however, reap far greater rewards.

And I don’t mean just financial. It is a privilege to work with such a historic building. And inspiring to bring it back to life.

So after a year (yes, a year!) of bank negotiations, and another year waiting for licenses, we are at the end of a very exciting build.

Although we have renewed the plumbing and electricity completely, installing air conditioning and heating, insulating the house against the elements and noise, and fitting double glazed windows, the intervention has been as gentle as possible.

We took the view that if the walls were sound, they should stay, even if the surface was uneven.  For that would be its charm.

Only where the structure was dangerous, the beams rotten or the plaster cracked and broken did we strip back to start again.

And what a series of unexpected treasures we found.

More about that in the July issue of the OP Property Magazine (and online) when we reveal how to find the best builder to work with you, how to get planning permission and how to enhance and protect old Andalucian buildings

Visit www.alcantarilla.co.uk or Ronda Romantica to find out more or to book at this wonderful new apart-hotel in Andalucia’s most charming inland town