A BRITISH holidaymaker has died after falling off a pedalo in Spain.

The unnamed 31-year-old fell off the boat at around 5.40pm and was dragged out to sea.

Paramedics were called to the scene but could not revive the man on the beach.

The drowning occurred despite the warning flags being green, suggesting the water was safe.

It is not yet known if an investigation has been launched. 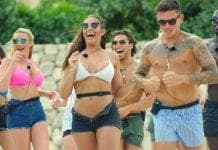