FIREFIGHTERS in Spain have been battling a major wildfire that erupted after a dung pile reportedly self-ignited amid an intense heat wave.

The blaze has affected around 10,000 acres of woodland near Tarragona and authorities have blamed ‘improperly managed’ chicken manure at a nearby farm.

Spontaneous ignition is not uncommon in dung heaps during hot weather due to the heat given off during decomposition.

“We’re facing a serious fire on a scale not seen for 20 years. It could burn through 20,000 hectares.

“Let’s be very aware that any carelessness could lead to a catastrophe,” said Catalan interior minister Miguel Buch.

The fires come as Spain battles a European wide heatwave that has seen temperatures exceed + 40C. 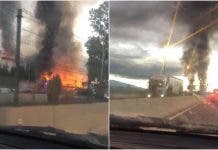