A DAD has been arrested in Spain for allegedly abducting his two year old daughter after he ‘lost custody’.

The 44-year-old is said to have taken his little girl ‘by force’ from a children’s home in Nottingham, UK.

Spanish police said he even threatened staff with a firearm and tied them up in a bid to take her.

But he was arrested at Madrid Airport during a scheduled stop en route to Algeria – the girl was handed over to local social services so she could be returned to the UK.

The detainee’s whereabouts today are not clear but it is thought UK authorities have prepared a European Arrest Warrant.

The suspect can appear before judges in Madrid in an extradition hearing and be flown back to Britain to face trial.

Spanish police said he had lost custody of his daughter in circumstances that were not fully explained in a statement on the arrest.

“The father had lost custody of his child but turned up at the centre and took her by force after allegedly threatening staff with a firearm and tying them up.

“He was held inside a plane which was heading to Oran in Algeria when it made a stopover in Madrid.”

The spokesman added: “The plane was just about to take off when he was arrested.

“The little girl was in good health and was handed over to social services so they could look after her until she could be returned to the UK.”

The arrest took place last Thursday, the same day as the abduction. 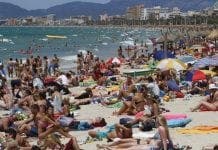