A DECADE ago you wouldn’t have dreamed of heading to Sotogrande to eat, unless you had a house there or had just embarked from a yacht.

Today, there are dozens of trendy places to dine with a vibrant and competitive scene to rival anything the top tables in nearby Estepona or Tarifa can serve up.

But considering the wealthy clientele who frequent this privileged enclave, perhaps that’s no surprise.

While the resort definitively comes alive in the summer months, these days most of the best restaurants keep going through the winter.

As well as great tapas restaurants and some exciting new eateries, the more established joints are going from strength to strength.

One of the most exciting changes over the last two years has been the development of the port area, in particular in Ribera del Marlin.

It’s a buzzing hive of activity on summer evenings with hundreds of punters fighting for the best waterside tables fronting a dozen great dining spots.

However, in the winter months many of the restaurants there stay open and continue to put on events and provide diners with decent menus.

Don Diego is one of those – an intriguing mix of Mediterranean dishes fused with Asian and South American cuisine.

Much of the quality is due to his raft of international cooks working in the kitchen under the watchful eye of Filipino head chef Nards Jet Ebilane.

Take his spring rolls or fish cakes as a starter, but leave room for his splendid fish curry or amazing Thai burger, made of succulent local retinto beef.

I liked the price of the Chateau la Gard, from Pessac-Leognan, a reasonable €50 a bottle, or the great value Pitacum at €26.

Run by the well established local restaurateur Victor Hornillos, who managed the place so well, he ended up buying it last summer, it has consistently got better and better. 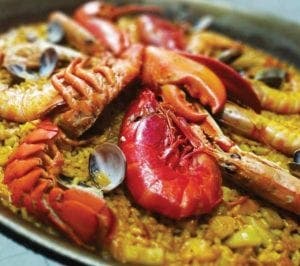 It has the nicest terrace and 30 different types of rice overseen by Jaime, a local Brazilian talent.

It also has a range of meat, pasta, good fish and, above all, a big wine list with dozens of references.

Also in the same run of restaurants is the superb Foodisiac, run by a talented American couple, who opened it last summer.

It has been a successful first year and the place has a distinct swagger about it.

Open from 9am and busy for much of the day, it manages to be both stylish and cool in equal measures.

It has its own bakery and a large number of different coffees on offer, not to mention some delicious looking cakes and desserts.

I was particularly impressed with the original mix of starters, perfect for a hot summer’s day. 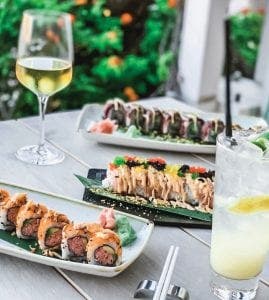 This included a delicious cold cucumber soup, which is not exactly typical of southern Spain, and it was as creamy and cooling, as it was original.

I then tried a delicious wakame salad with caviar and smoked salmon, which was light and spicy and looked delightful, with its flower petal garnish.

There is a lot here, and everything has a ‘twist’ on traditional Andalucian cuisine.

Finally, the true godfather of the port Midas is still going strong after over 30 years.

Well established in the extreme, this is THE place for a business lunch or a dinner to impress, sitting right by the main port area.

Staff are smart and formal and the institution is bossed by the talented businessman Luis, who keeps a close watch at most times.

In particular, you should head here for a great value menu del dia, while at night the ambience is charming in the extreme.

Interested in Asiatic food, you might also want to try the emblematic La Finca, which sits next to La Casita campsite in San Roque and is another great find.

In summer you sit around a leafy courtyard, a riot of colours and candles, while in winter you dine inside the authentic farmhouse with stone floors and fireplaces.

In the opposite direction, restaurant Mar Sana at the Milla de Plata hotel (www.hotelmilladeplata.com) is a charming spot for an evening meal, heavy on fresh fish with its own speciality tuna menu. Just outside Torreguadiaro, it sits on a headland overlooking a rocky cove with views to die for.

Also try il Sono (www.ilsono.es on Cala Sardina, which has been voted Spain’s greenest restaurant and has a genuine focus on the environment.

For more casual chiringuito fare a little closer to the resort, head for wonderful Gigi’s Beach (www.gigisbeach.com), ensconced on the edge of the marina by the sailing club.

The creation of Georgina ‘Gigi’ Taylor, her youthful, hard-working approach to style and taste makes this a surefire winner for local foodies and the international jetset alike.