A BRITISH teenager who plunged seven floors to his death in Andalucia has been named as Max McMullen.

The 15-year-old, who is believed to have attended Bath’s Beechen Cliff school, died in Cordoba, where he was an exchange student.

His tragic death came just two days into a week-long trip with other students and is still being investigated.

The teen, a player at Walcot Rugby Club, was fixing a broken blind in the house of the host family he was staying in, according to the Sun.

A Policia Nacional spokesperson said: “There doesn’t appear to be any signs of criminality or evidence pointing to the involvement of anyone else.”

A Junta spokesperson confirmed that the boy had fallen the seven stories to his death out of the bathroom window of the property in Calle Periodista Quesada Chacon.

The Junta’s territorial delegate of Education Cordoba, Inmaculada Troncoso said: “We are showing our support for the family and we are there for whatever they need.” 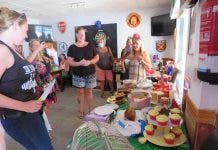 Lydia Spencer-Elliott - 30 Sep, 2020 @ 16:28
ICU patients have more than doubled in the last month, according to data from the Ministry of Health.