A BRITISH couple may be forced to abandon their iconic Mallorca music bar after a hate-filled campaign by ‘homophobic’ neighbours has seen their vital karaoke licence suspended.

Leanne Green, 37, from Leeds, and her partner Melanie Bland, say the ban has cost them 80% of their business and has only come about due to the harassment campaign by their Spanish neighbours.

It comes after the Olive Press revealed in August how the family living upstairs allegedly called the couple ‘dirty lesbians’ and told them they ‘didn’t want their kind around here’.

They were also caught spitting on the premises and making rude hand gestures by CCTV.

Leanne told this paper how police have visited Betty’s Bar in Santanyi 25 times in the last year due to noise complaints, despite the couple forking out €30,000 on noise reduction materials, including limiters and soundproof doors.

By contrast, Bongos, a nearby bar, has only been visited twice by police over the same period.

In late September, police arrived at the bar on one of their busiest Saturday nights and handed the couple a letter from Santanyi Town Hall which said their karaoke licence had been suspended.

The letter said that council workers had measured the noise at their neighbour’s apartment and found it to be five decibels too high.

But Leanne claims the reading fails to take into account surrounding noise from nearby bars and vehicles.

“When the doors are shut, you can’t hear a pin drop,” she told the Olive Press.

“They have taken our karaoke away. Is that not discrimination?”

Despite living in Mallorca for 17 years, Leanne says that a police visit last week during which coppers threatened to close the bar down was the final straw and that they’re now reconsidering their future on the island.

“There comes a time when you say I’m not going to put with this anymore,” Leanne told the Olive Press.

“I would rather not leave, because we have built such a good reputation here. We built this from scratch, put the floor in, built the roof: we don’t want to go.”

Leanne, who is a singer by profession, says they may try and move to a different location in Mallorca.

Since the bar lost its licence, Leanne says the upstairs neighbours have been goading the couple. “The mother waited for us and said ‘I’m happy you’re not singing anymore,’” claimed Leanne.

Despite receiving support from people in the local area, the British couple say they’ve been left helpless after the new mayor of Santayi, Maria Pons, ignored their letters informing her they were being harassed.

“She doesn’t even respond to the lawyer,” said Leanne.

Even if they win their case, the couple say it could be as late as May or June next year until they get their licence back.

Santanyi police confirmed they have visited Betty’s Bar numerous times due to neighbours’ noise complaints. They said that the bar should shut everybody inside from midnight and added that they were following instructions from Santanyi Town Hall with regards to the bar’s karaoke license.

Despite this, Santanyi Town Hall said it didn’t know anything about the case. 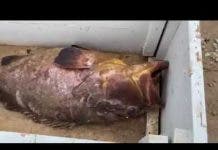 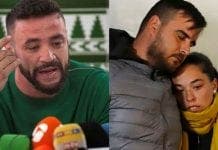 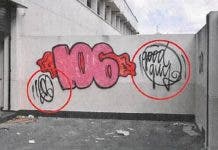 Judge in Spain cites British icon Banksy as he lets off graffiti ‘artist’ who tagged private homes and monument because ‘he could be a...

Joshua Parfitt - 21 Jan, 2020 @ 19:01
A LARGE fish has been filmed on a pavement in the Costa Blanca after it was hurled inland by storm Gloria.