THE Hard Rock Cafe has landed at Malaga airport.

The franchise is planning to open a store in Terminal 3 in March.

This is different to the Hard Rock Cafe restaurant that is open in the centre of Malaga and in Marbella, as this won’t have any food, just merchandise.

Some of the items on offer are pins, tshirts, jumpers, caps, backpacks and other items suited to all ages and tastes, as reported from the company.

Hard Rock Cafe own 10 stores across the whole of Spain, both restaurants and merchandise.

The company has 262 stores across 76 countries, including hotels and casinos.

The American business has the world’s largest collection of musical instruments, with more than 83,000 pieces on display around the world.

In 2018 it was recognised by Forbes magazine as the best company to work for women in the Global Gaming Awards. 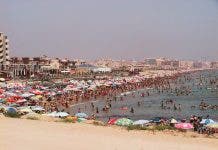