THE UK’S infection rate for COVID-19 is nearly double that of Spain, according to a study from Spain’s leading institute on information systems and computer science.

The ‘spreading rate’ of a country estimates how many individuals a COVID-19 positive person will infect, and figures are being published daily by the Universitat Politecnica de Catalunya (UPC).

Monday’s report suggests a person infected in the UK spreads the virus to 1.68 other people – while in Spain, 1.01 other people are infected.

The figure helps to evaluate of the ‘quality of control measures made in each state’, according to the report from UPC’s Computational Biology and Complex Systems department.

The authors write that Spain ‘is on the right way’ to controlling the COVID-19 epidemic.

But the UK – which implemented a lockdown nine days after Spain – is ‘clearly in an alarming growth phase’.

Spain remains the country with the most cumulated cases of the novel coronavirus in Europe, with 130,759 as of Monday’s statistics.

But mathematical models used in the study predict Spain’s attack rate (number of cases per 100,000, currently 282.1) is set to fall while the UK’s is set to increase over the next few days.

The report suggests that a spreading rate of 1 indicates the coronavirus pandemic has reached its peak and a decline in cases in beginning. 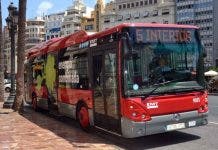