POLICE have swooped on a luxury Marbella villa to arrest three men accused of shooting a Brit four times in the legs in a gangland ‘settling of accounts’.

Two British men aged 23 and 24 and a 29-year-old Irishman were detained over the May incident in which a 27-year-old man was shot in both legs.

Investigators say that the victim was in the same drugs trafficking gang as the three arrested men.

After the shooting, the victim was driven to the Costa del Sol hospital in Marbella by a ‘friend’ who was one of the three arrested.

Police say the Irishman, far from finding the victim in the street as he had claimed, had in fact taken part in the shooting.

He then tried to throw police off the scent by feeding investigators false information. He even accompanied officers to point out the alleged site of the shooting several times. But in reality the offence had happened six kilometers away.

Assuming that the investigators would never suspect the link, the perpetrators agreed to hide the weapon used at the victim’s own home.

But police investigations uncovered the connections between the victim and the alleged gunmen and raided a villa.

There they found the semi-automatic pistol used in the incident and 140 bullets, a sweatshirt stained with the victim’s blood plus three stolen vehicles. 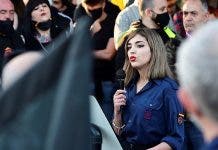