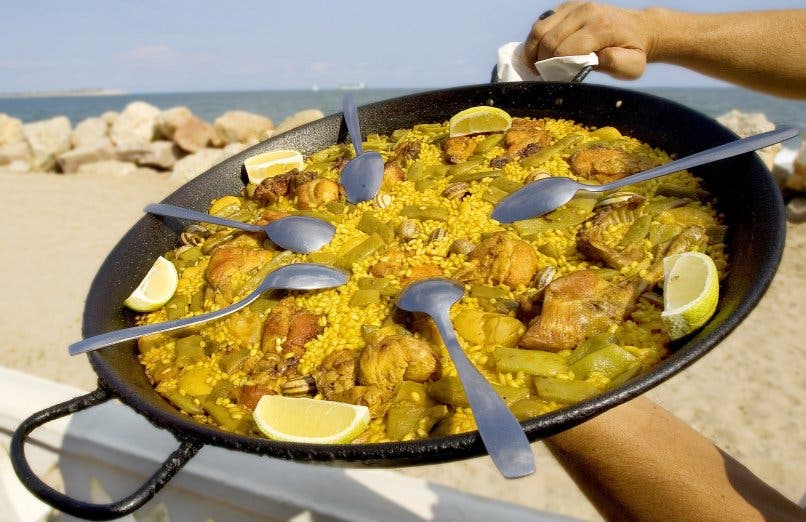 PAELLA is one of the first Spanish dishes most people name, but in case you don’t know, the Valencia region is where it was first conceived.

And in case nobody is under any illusion over how proudly its valued in the area, Valencia today(September 20) celebrates its third World Paella Day.

Eight chefs have been drafted in for a contest to come up with the best paella.

The competition will be streamed from 10.00am via worldpaelladay.org

Recipes vary across Spain and around the world as one of the great things going for a paella is that you can mix and match the ingredients to produce whatever you want.

Seafood paella dispenses with the meat, and usually the beans and rosemary, and replaces it of course with seafood of various types, of which there is plenty available across Spain.

So if your paella experiences are just purely down to having one at your local bar or restaurant, here are a few tips to note as you embark on your own personal Valencian paella adventure in your kitchen:-

You might be tempted and it seems obvious to chuck them into the mix, but they produce too much liquid, and you don´t want a soggy paella.

Fry your meat of choice, followed by the seafood, then the vegetables.

You’re trying to get all of the flavour from all of the ingredients into the rice.

When the veg, meat and fish are cooked, the paprika should go in and be mixed through, quickly, to avoid burning, which gives it a bitter flavour.

Then you add the rice, followed by the stock, and it shouldn’t be stirred at all, because the grains of rice should stay separate.

To stop it from sticking,  you can shake the pan.

Towards the end of the cooking process, stop shaking the pan, because you do want a bit of stickiness to get a thin and crisp layer of toasted rice at the bottom.

Take the pan off the heat and cover it in foil for up to 10 minutes, as the dish cooks under its own steam.

Don’t make a grab for a lemon wedge to squeeze away to your heart´s content, before you actually first taste the paella.

A old-style Valencia region paella does not include lemon, but wedges act as a garnish where tradition dictates that they can be used when the taste of the final product is not what was expected!