ANDALUCIA, Madrid, Catalunya, Valencia, the Balearic Islands and Castilla y Leon are among the European regions most vulnerable to the economic consequences of the pandemic.

EU regions have been unevenly hit by the coronavirus pandemic, according to a new report published this Monday by the European Committee of the Regions (CoR).

The CoR identifies that a great part of Spain as well as Ile-de-France and most of the Italian regions are among the areas of the EU have been hardest hit economically due to the pandemic, along with coastal regions in Croatia, eastern Bulgaria and Greece.

The CoR report found that the most socially and economically hard-hit regions are those that were under strict lockdown measures for the longest period and not necessarily those with the highest death rates or most cases detected.

The pandemic, meanwhile, has also brought to the frontline the regional disparities in healthcare systems which, in many cases, have suffered from underinvestment in the years prior to the pandemic.

Additionally, countries like Spain are more vulnerable because of the “high level of micro-enterprises and self-employed workers”.

Andalucia being among the three regions in Spain with the most self-employed workers.

Furthermore, the negative economic impact triggered by COVID-19 has been greater in countries like Spain with strong dependence on tourism.

Spain was also highlighted as one of the countries with a lower number of hospital beds compared to other EU countries.

Moreover countries with a substantial elderly population, as in Spain, have seen additional pressure placed on the healthcare system leaving the corresponding local and regional authorities struggling to respond effectively to the pandemic, the report finds. 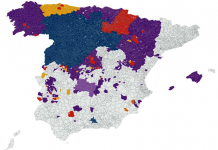