UNEMPLOYMENT in Spain has risen by 10% since July according to the latest figures released by the INE (Instituto Nacional de Estadistica).

Over the last quarter from July to September, the number of unemployed people in Spain has risen to a total of 3,722,900.

It means some 355,000 more people are now without jobs in Spain.

More than a quarter (25.65%) of expats in Spain are unemployed, revealed the survey.

Meanwhile, 14.77% of the Spanish population are without work.

However, unemployment rose dramatically more among Spaniards over the last quarter with the number of jobless people increasing by 276,100.

Among the expat community, meanwhile, the number of unemployed rose by 78,900.

Compared to this time last year, unemployment in Spain has risen by more than 15%— that’s 508,500 more people out of work.

The agriculture sector was hit the hardest while the construction industry has seen a reassuring rise in employment levels since the end of lockdown. 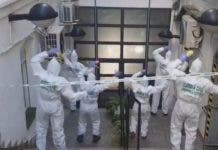