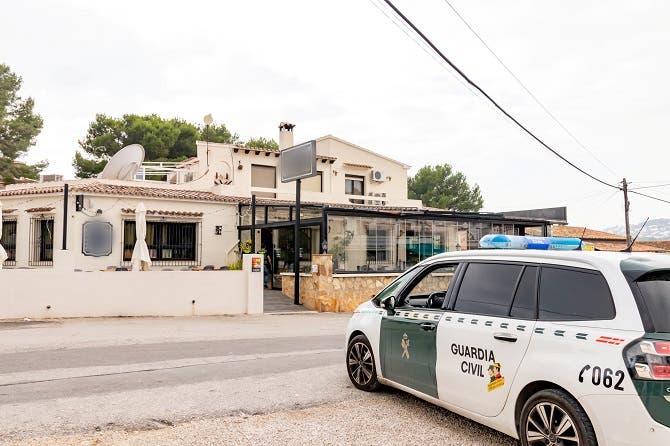 FIVE British men have been arrested in the Teulada-Moraira area of the Costa Blanca over a big marijuana growing operation.

The ring-leader owns a restaurant in La Sabatera which was used as a front for the illegal activities.

Guardia Civil agents seized 1,600 plants in their raids on four marijuana farms, with the drugs said to be worth €200,000 on the black market.

They were destined for the UK or to be sold to dealers on the Costa Blanca.

The arrests were largely down to somebody tipping off the authorities that the restaurant was serving more than just food and drinks,

The premises just happened to house a basement marijuana plantation with an illegal electricity supply hook up that went through a three-metre tunnel under the Mostoles road.

€60,000 of electricity was said to have been illegally syphoned by the gang.

The restaurant owner lived close-by in a €4 million-valued villa.

He is said to own several properties in the area, in addition to having a range of high-end cars.

The boss had an employee live in a flat on the restaurant premises with the express purpose of guarding the marijuana crops in the basement.

Other ’employees’ helped with the operation, including a man who acted as a supervisor on behalf of the gang boss.

A Guardia Civil surveillance operation spotted marijuana being transferred from a number of villas to the restaurant owner’s home, which stored all of the matured crops as well as housing its own plantation.

A series of raids were staged on November 19, where the gang leader tried to flee his villa by jumping out of the window.

He had €11,000 in cash on him and investigations uncovered that one of his villas was used as a base to launder money from the drug operation.

Besides the five arrested British nationals, two Argentinians, a Moroccan, and a Columbian were detained.

Three of the unnamed group have been denied bail after appearing before a judge in Denia.